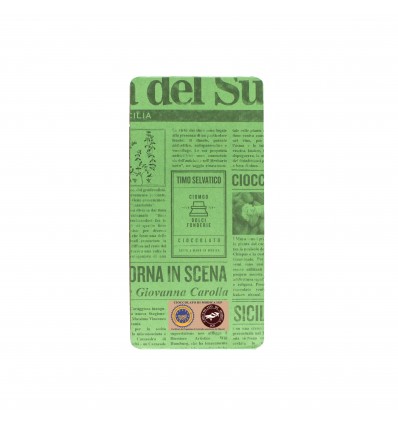 This product is no longer in stock

The wild thyme, also called Satra, has an history that is lost in the mists of time.

The Satra is an aromatic and endemic plant from Mediterranean with its lilac owers and a scent that resembles the scent of wild oregano, it has always been used for its antiseptic properties.
The Greeks believed that thyme might give courage and ardour, the Romans used it as a pinkiller and were the first to use it in the kitchen, in the Middle Ages was donated to the knights because they believed would protect theme in battle.
It became a symbol of strength and courage, today the Satra is primarily used in cooking and is known for its antibacterial properties.
In the Iblei area this plant, with its millenarian and sacred history thrives in sandy and sunny soils, better if exposed to salt.

For our bar, the precious Ecuador National single origin cocoa meets the Satra that, thanks to the transfer method in working process, gradually releases its fragrance and its aromatic notes. The result is a chocolate with an enchanting and persistent flavor.

It may contains traces of nuts, milk and milk’s derivates.

13 other products in the same category:

Chocolate with "the late mandarin" of Ciaculli.